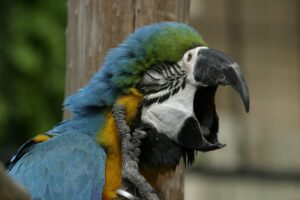 Birds are one of the most lovable pets you can keep at home. Before adopting a new bird, it is best to become familiar with common diseases of birds. By being aware of the symptoms of bird disease, you will quickly notice his disease and prevent further problems.
Some birds contain microbes that can be harmful even to humans, so paying attention to bird disease, in addition to ensuring the bird’s health, also prevents germs from entering the human body.

Do not miss these articles:

Once you feel that your bird is not feeling well at all and you have symptoms of the disease, you should take him to a veterinarian immediately for an examination. There is a great variety of bird diseases, but in general the most common ones include the following.

Unexpected dilation is one of the most common diseases of birds that affects the bird’s nerves, but it will have the greatest impact on the digestive system. General symptoms include vomiting, weight loss, stool changes, and sore throat. To treat this disease, non-steroidal drugs and special diets are usually used, which will reduce the pain of birds.

This disease is called a fungal infection that will affect the digestive system of birds. Symptoms of Candida include digestive problems, decreased bird feed, white matter, and vomiting. Failure to treat the disease may result in the death of your bird; For this reason, after observing the symptoms of the disease, you should treat your bird immediately.

One of the diseases of birds observed in parrots is parrot fever, which is associated with symptoms such as anorexia, infection, respiratory disorder, lethargy and directly affects the kidneys of parrots. This disease is contagious and the bird must be treated so that there is no other danger. Parrot fever is controlled by antibiotics.

Vitamin A deficiency in birds:

This disease is most common in young parrots. Polyoma is a deadly disease that presents with symptoms such as enlarged abdomen and diarrhea. It is one of the most deadly diseases that birds struggle with.

This disease affects the parrot family and can be detected by symptoms such as feather shedding and growth of bird body lesions. Avian bird disease causes a lot of pain to the bird body and you should treat it as soon as possible.

One of the diseases that birds sometimes struggle with is the common cold. Colds will have symptoms such as chills, sneezing, lethargy, etc.

These are just a few of the illnesses that your beautiful bird may have. If you own a bird and notice that its behavior has changed from before and it is not eating enough, you should consult a veterinarian immediately for treatment; Because diseases of birds is one of the most common causes of death. Most diseases are cured with medicine and some of them will be transmitted to the human body, so prompt treatment, in addition to restoring the bird’s health, also prevents the pet bird from becoming ill.

5 thoughts on “Common diseases of birds”