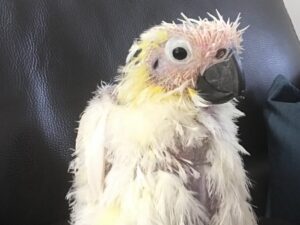 Psittacine beak and feather disease (PBFD), or avian AIDS, is one of the most dangerous common diseases among birds. PBFD is caused by a virus that targets parrot’s beaks and feathers and then attacks their immune systems. In 1975, the PBFD virus was discovered following an investigation into the deaths of thousands of Australian cockatoos. This virus has been known as one of the deadliest viruses in the parrot family(cockatiel, cockatoos, lovebird & etc).

The virus is highly contagious and is easily transmitted through the air. In addition to air, the virus spreads to other parrots through parrot tears, faeces, shared food, and respiration. It is even possible for a female parrot to transmit the virus to her kids to have PBFD from birth. One thing that is not known about PBFD is when it occurs. One parrot shows symptoms within three weeks, and another parrot has no symptoms of having the virus for several years. The virus latency period to show up depends on the amount of virus in the bird’s body, strength, and age.

Symptoms of PBFD in parrots

The disease can be divided into acute, subacute and chronic depending on the amount of virus in the host body, and each of them has its own symptoms.

Symptoms of PBFD in chronic condition

This condition is more common in older parrots, the most common symptom of which is the fragility and softness of the feathers, which can be easily removed from the bird with a small blow. After shedding the feathers, no feathers may replace it, and even if the feathers regrow, they have a different color.
• Round stop for parrot body
• Thinning of feathers
• High fragility of feathers
Bleeding in full growth areas
• Parrot color change
• You empty your beak
Browning of dead tissues in the beak
• Anorexia
• Green discharge in parrot tears
• Infection
• Breaking a parrot’s beak
If a bird from the parrot family suffers from this degree of disease, it becomes weaker every day than yesterday and will die after a few months.

Symptoms of PBFD in acute condition

Acute cases of PBFD are more common in young parrots, unlike chronic cases. The most obvious symptoms are:
• diarrhea and vomiting
Depression
Abnormal beak
• Strange appearance of feathers
• Respiratory disease

Also read: how to teach a cockatiel to talk

In the end, the parrot loses its life.

Symptoms of PBFD in the acute condition
In the acute condition; You will see more symptoms of PBFD in the bird’s feathers and body. In this disease, the newly emerging feathers are very fragile and damaged and there are wounds on the bird’s body.
• Decreased bird appetite
• Loss of normal feathers
Bleeding at the site of full growth
• High brittleness
Constant shedding of body feathers
• Parrot weight loss
Eventually these symptoms will lead to the parrot’s death.

Unfortunately, PBFD disease has no cure for parrots, and the parrot dies within a few months to 2 years after being infected. Sometimes, if a parrot’s immune system is strong, the symptoms of the disease disappear and it is treated in a way that is rare.

In some cases, the bird’s immune system can naturally produce the necessary antibodies and defeat the disease with the help of some booster drugs. If you notice any symptoms of PBFD, see a reputable bird veterinarian.

2 thoughts on “PBFD disease in birds and parrots, symptoms of the disease”