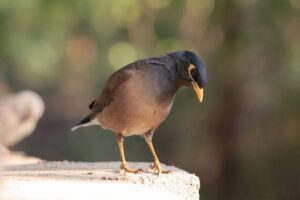 You’re probably new to keeping Myna talking too. Enamel is a beautiful and sweet bird that keeping it is a beautiful and unique experience. This bird has long been popular among the people and was kept by many families. Many families now enjoy keeping this clever bird talking every day. Because this bird is easy to keep like other birds and does not cause trouble. So join us to achieve this beautiful experience.

Of the various birds, most parrots are talkative. But the myna or mockingbird can mimic and replicate the sounds around them even better than some parrots. This bird has a high IQ and with training and repetition, it is possible to teach the myna to repeat words and even short sentences. In this article from cotwer website, we have taught how to make an myna speaker.

Is it better for a male or female myna to speak?

Both males and females of myna have a good ability to learn words and imitate them. But the male myna hen can imitate words more clearly. Therefore, most people choose male myna for speech. But it is also important to note that male myna needs mates after puberty and may run away from home in search of mates. Also, the myna breed learns to speak more clearly and faster than other breeds.

What is the age of learning to talk to myna?

Try to use young birds to teach speech. 2-month-old chickens are a good option for training. Of course, depending on the storage conditions, it is possible to learn to speak at an older age.

To teach the myna to speak, it is best to approach young birds that have not yet reached adulthood. Male myna usually reaches maturity at the age of two. Also, the maximum life of this bird is 15 years, and the domestic myna can live 8 to 10 years if kept under favorable conditions.

The choice of two-month-old myna will be desirable for keeping and training speech. Myna instinctively pays attention to the sounds around them from birth. If they hear a sound or a word repeatedly, that sound becomes the queen of the bird’s mind, and the bird can mimic that sound when its larynx is well developed.

Many people are unaware of the myna speaking talent. But myna has its own unique features. This bird is very social and easily domesticated. Myna speech training also requires a lot of patience and time. An adult myna can take less than 3 months and another may take more than a year to imitate words, but the younger the bird, the faster it will learn. Of course, the old myna can also be trained and imitate the repetition of words. But training to speak this type of myna will be very time consuming.

Another inherent characteristic of myna is their sense of jealousy and aggressive behavior. If this bird feels a lack of love, it will become naughty and express its anger and protest. A talking myna also tends to speak in the presence of strangers. While some parrots only talk to their owners.

Is it necessary to use the voice of a myna to teach speaking?

No, using the sound of another myna can be more effective during mating or when you have lost your bird. In speaking, it is better to spread the words that you are trying to teach the bird.

Go for simple words to start learning. For example, start with the word hello. This word is very simple and of course widely used. Greeting the myna will also be very attractive to its viewers.

Each time you repeat the word, you must repeat the word exactly with the previous tone. Also, soft and gentle sounds will be suitable for teaching myna speech. Hence, talking birds imitate the female voice much more clearly and loudly than the male voice. It is also best to teach only one person to speak to the bird. Because for many birds of prey, salutation is completely different from salutation and each is a separate word.

Repeating will be the key to your success in speaking the myna. Myna is usually a noisy bird. It is better to keep this bird away from annoying noises and whistles and screams. Because if the myna is frequently exposed to annoying sounds, it will imitate them, which will not be satisfactory at all for their owners.

Repeat the selected word at least four times a day at specific times in front of the myna. While doing this, you must be careful to stand exactly in front of the bird and make eye contact with the bird. Also pause for at least 5 to 10 seconds in each repetition and then repeat the word again. You can do this word repetition for five minutes. After the performance, do not forget the myna rye. Sweet fruits such as grapes, blackberries, cherries and figs are among the favorite foods of myna that can be used as a reward.

This is because it makes the myna conditional on your behavior and reaction and prepares the bird to speak. As soon as the myna first learns perfection, the process of speaking accelerates. You can teach the second word to the myna just like the first word.

Mynas are very intelligent. Although they cannot understand words, they can be taught short sentences.

Training time should be short

Each time you learn and repeat the word, try not to spend more than 20 minutes. You also need to give the myna enough time to think about what you are saying. They are usually better prepared in the early morning and evening.

In some cases, you may not be able to spend much time with the bird during the day due to work. In these cases, it is better to use a recorder or voice recorder. Record the word or phrase you want with the device and place it near the myna cage. You can play your voice for half an hour a day with a pause of 4 to 5 minutes for the myna.

Choose the right place for training

You should choose a quiet place away from hundreds of annoying people while teaching myna. The night is exactly when the myna rests. In the early hours, you can continue to teach the myna in a dim and dark environment. Because at this time of night, the myna is quite calm and can pay close attention to the sounds around it. If his eyes were closed, do not worry and keep repeating the word.

Yes, myna is an intelligent bird, you can use incentives to encourage myna to speak. This should not be exaggerated, which will cause the bird to become conditioned.

When you buy a myna or get a gift from someone, you have to wait for the bird to get used to the new owner and environment. He will be quiet for the first days and weeks, he may even look depressed. Therefore, in the first days, more attention should be paid to it so that the bird gets used to the new owner. Myna can understand emotions. Each myna has its own unique personality. Some mink mynas hate children, while some only care about children.

It is better not to keep the myna in the same place with other ornamental birds. Also, for teaching speech, the myna must be without a pair. Otherwise, he will spend most of his time with the couple and will not pay much attention to his owner.

Interact with your bird

Communicating with the myna and talking to her directly can greatly help her learn to speak. When spending time with a bird, be sure to talk to it. For example, greet him when he sees him, or tell him you eat when you feed him?

Carefully observe what the myna does, such as eating from your hand, playing with toys, or…., and encourage the bird. For example, tell him every time he is an entrepreneur or a good boy or any other favorite word to make this phrase the queen of his mind. You can also give myna to popular foods such as nuts and nuts or pieces of sweet fruit.

If you want your myna to learn to repeat words well, do not let it get used to hearing whistles. Because if the myna imitates a certain rhythm, it will be less interested in speaking words or sentences.

Using a mirror in a cage can increase the sense of trust and relieve the stress of the myna. He will also start communicating by looking in the mirror. Also place a container of water inside the myna cage so the bird can clean its feathers. Bathing helps a lot to keep the myna fresh. Do not forget that the myna must be fresh and healthy to teach speech. The key to your success in teaching myna will be repetition and patience.

Myna talk is very similar to cartoon characters and therefore talking myna is very interesting and funny. This bird can establish a deep emotional relationship with the owner or family and become dependent on them. Therefore, it is necessary to pay attention and love them. If your myna is hand-held and sits on your hands, you can teach it to speak much faster. Also, in the field of raising myna and keeping it at home, you should be very careful about the food of this bird because the digestive system of myna is sensitive to vitamin C and iron and causes many problems for the bird.