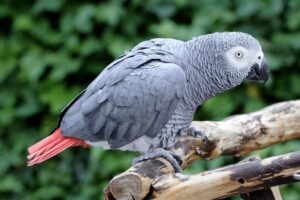 The African Gray Parrot, or Casco, has a large following due to its high intelligence and ability to speak, and is one of the first species to be kept in its habitat. Relying on his extraordinary intelligence, Gray Parrot can quickly learn and use words. Of course, the not only amazing thing about Gray Parrot is the ability to imitate, but these birds can also understand the human condition. Gray Parrot , like a small child, easily understands the mood of those around him and over time will understand the meaning of the words.

The Gray Parrot bird starts to speak after training from the age of 1 or a little earlier and can be taught up to 1000 different words. Casco can learn words from you quickly, so it takes less time to learn a word than other birds. This bird can even make sentences and convey its meaning to its owner by saying words. Of course, the art of imitating Gray Parrot ‘s voice is not limited to words, but this bird can also imitate all the surrounding sounds, such as the ringing of a telephone or the sound of an alarm. Due to Gray Parrot ‘s constant imitation of the environment, it has a lot of noise and you should pay attention to this point before buying it; A Gray Parrot is never silent.
There are different types of Gray Parrot , but the most important breeds are Gray Parrot Congo, which differ in height and weight. Congo is the largest type of Gray Parrot and its tail is completely red, but the team is smaller and its tail is dark gray.

As the name implies, the African Gray Parrot is gray in color, with feathers only darker on the head and wings than on other parts of the body. Gray Parrot , 33 cm tall and weighing about 400 grams, has a very strong beak in black or dark gray, and their tails are usually red or gray. Younger casks have gray and black eyes, but the eyes of adult casks are yellow or orange. The African Gray Parrot has a long lifespan and can live up to 60 to 80 years under favorable living conditions. Due to the large size of Gray Parrot birds, it is better to consider a large cage and enough storage space for him before buying so that you do not face any problems in the future.