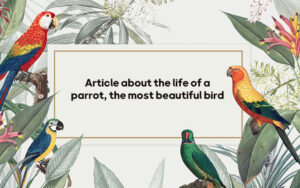 Parrots are about 372 species of birds in 86 different genera that make up the order of parrots from the genus Parrot and live mostly in tropical and subtropical lands. The order of parrots consists of three superfamilies, which include parrots (true parrots), cockatoos (white-toothed parrots), and cockatoos (New Zealand parrots). The most diverse parrots are in South America and Australia.

Having a large head, a short neck, a hooked beak, and the ability to climb a tree are common features among different types of parrots, but these lovely birds have amazing features, such as colorful and beautiful feathers. The parrot uses its beak to feed and jump over tree branches. Their beaks increase the ability of their legs to climb tree trunks. The shape of the parrot’s beak is such that it increases the bird’s ability to cut and break the fruits and seeds it feeds on; Fruits such as walnuts, hazelnuts, and peanuts, which have a firm shell, are the bird’s favorite fruits, but parrots, which have smaller bodies or limbs, prefer to feed on the nectar of fruits and pollen with the help of very fine villi on their tongues.

What makes this bird popular among humans is its ability to mimic the human voice. Although parrots do not use a specific language to speak to each other, they are capable imitators and use their memory to imitate sounds. Studies of these birds have shown that parrots are better able to use their abilities to imitate the different sounds they hear when they are severely hungry or aware of the presence of an unknown person.

In parrots, two of the toes are bent forward and the other two toes are bent backward. This feature facilitates their movement and standing on the branches of trees. The parrot has bright and beautiful feathers. The green feathers, which cover a large part of the body, allow the parrot to easily hide among the leaves of the trees. In addition, blue, yellow, and red feathers can be seen on the body of this bird, which doubles its appearance. This group of birds has short, round wings that are not restricted when flying among the foliage of trees.

An important point in feeding birds is food diversity. Birds in the wild choose the right food according to the nutritional needs of their bodies, but it will not be possible to choose the conditions in the cage. For this reason, the food that you provide to your bird daily should contain different types of food so that the bird can choose the food it needs. Give the bird a small amount of food daily to make sure it is fresh and to be informed in time about the change in your bird’s appetite, which is one of the first symptoms of many diseases.

Many types of parrots can be distinguished by the different colors of their wing feathers and head and tail feathers. The parrots’ wings are colorful and their beaks are crooked and crooked, some have short tails and tails and some have long tails. They usually use fruits and seeds and have very strong beaks that are used to break hard seeds. Most of these birds do not have sex and both sexes are the same. The color of most parrots is green, which is combined with other bright colors. Sometimes parrots have several different colors.

There are very few fossils from the parrot order, which has led to speculation about how the bird evolved. A seventy-million-year-old 15-millimeter fossil found from the lower beak of a parrot in the Lance Creek Formation in the village of Newbie in Viswig was one of the first fossils of the Cretaceous. Subsequent research showed that the fossil was probably from the kagnatoid dinosaurs (a group of dinosaurs that were not bird-like but had bird-like beaks).

What is accepted today as a hypothesis is that the order of parrots and their ancestors were subject to the third major extinction that occurred in the Cretaceous about 65 million years ago. If this assumption is correct, parrots should not have evolved from a dinosaur ancestor that bore a morphological resemblance to parrots, but merely evolved into tree-dwelling birds.

Europe is the first place where the first fossils of tree parrots have been seen. This is the first piece of bone to be found from the wing of Mopsita Tanta, discovered in Denmark and is about 54 million years old. Europe’s climate at that time was tropical (corresponding to the warm eras of Paluin and Eocene). The newest fossil found in Europe is about 50 million years old. Some almost complete parrot-like fossils have also been found in England and Germany. Some fossils have not yet been accurately identified.

What we do know about these fossils, in general, is that they are not the fossil relatives of modern parrots, but the ancestors of those that evolved in the Northern Hemisphere and later became extinct. Of course, these are not exactly our missing links among modern-day parrots, but they can be said to be parrots that evolved from their relatives and ancestors along with parrots and cockatoos.

The newest fossils found in modern parrots are about 20 to 23 million years old, similar to those found in Europe. Subsequently, it is a fossil containing the bones of modern parrots.

The cockatiel (scientific name: Nymphicus hollandicus) belongs to the family of crested parrots and is the smallest member of this family in terms of size in Australia. These birds are very popular as pets worldwide and they are relatively easy to breed. These birds are the most popular ornamental birds after lovebirds.

The bird was previously thought to be a member of the parrot family, but recent molecular studies have identified the bird as belonging to the crested parrot family. Brides are native to remote areas of Australia where their favorite areas are grasslands and short shrubs.

In English, this bird is called Cockatiel and is known by the same name in the most common languages ​​of the world. The name of this bird is Callopsitte in French, Nymphensittich in German, and Alcocatil in Arabic. In Persian, this bird is called “Dutch bride” and the name “Dutch bride” is very common among bird sellers and breeders. The name “Dutch bride” is a scientific and Latin translation of this bird. The Dutch bride’s food is grain, but certain species of these birds may like eggs and carrots cooked and grated with a fine grater and avoid eating Enjoy, note that eggs and carrots must be well cooked and very finely grated.

Types of talking parrots in the world